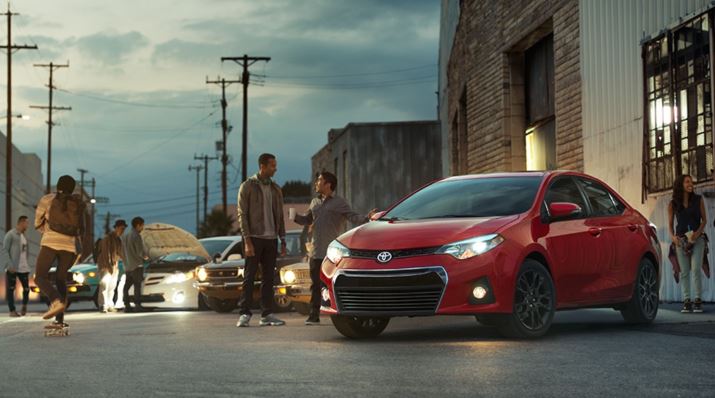 To commemorate the nameplate's 50th anniversary, Toyota has unveiled the 2016 Corolla Special Edition, which is based off the sporty Corolla S.

Standing the Test of Time

You don’t last 50 years in the automotive industry without doing more than a few things right but here we are with the 2016 Toyota Corolla, which has been in continuous production since 1966. To commemorate this milestone, Toyota has released a very Special Edition 2016 Corolla that sports unique styling touches and is based off the already eye-catching Corolla S.

Other than that, the Corolla retains all the qualities you’ve come to expect from the popular nameplate for the 2016 model year.

Read on for our comprehensive review.

The 2016 Corolla is powered by a standard 1.8-liter four-cylinder engine that creates 132 horsepower and 128 pound-feet of torque. It’s mated to a six-speed manual transmission on L models, but if you’d rather relinquish control a little, a four-speed automatic is an available option.

On all other trims, the Corolla’s 1.8-liter swaps out the more traditional four-speed for a continuously variable transmission (CVT). Still, if that’s not your thing, S models can be had with the six-speed manual. 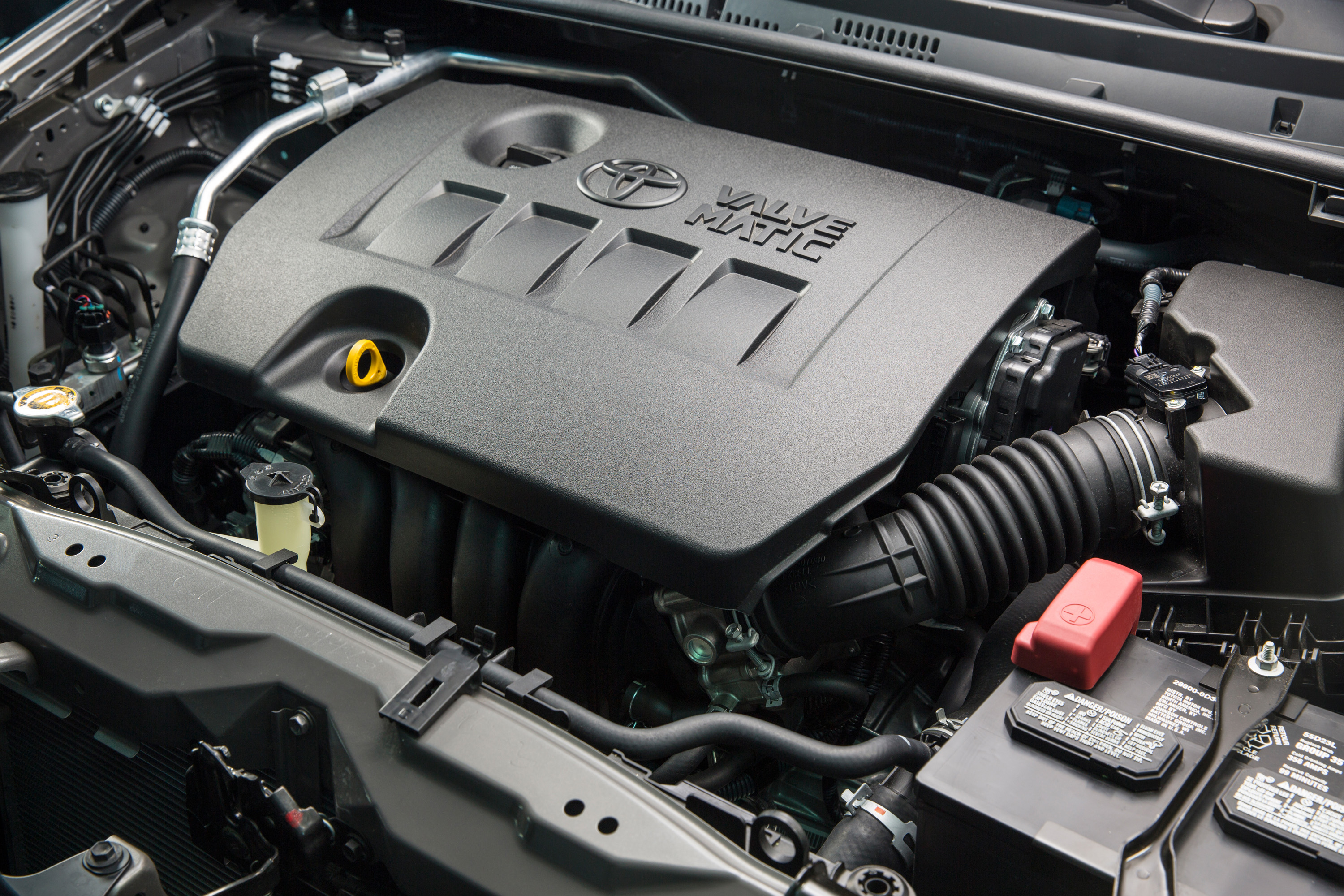 An even more efficient version of the 1.8-liter is also available on the LE Eco. This particular version has its output boosted to 140 horsepower and 126 pound-feet of torque. Naturally, it’s the most fuel-efficient of the bunch, earning an EPA-estimated 35 mpg combined (30 city/42 highway).*

Just because the Eco leads the way in terms of fuel economy doesn’t mean the other models lag behind. Base L models earn 31 mpg combined (27 city/36 highway) when paired with the four-speed automatic,* and 31 mpg combined (28 city/37 highway) with the six-speed.* Models equipped with the CVT return 32 mpg combined (29 city/38 highway), * while Corolla S earns one less mpg on the highway.

The 2016 Toyota Corolla is a four-door compact sedan with seating for five. It starts at $17,230* and can be had in L, LE, LE Eco, S, and Corolla S Special Edition trim levels. On all but L models, buyers can further enhance their Corolla by selecting one of two sub-trims: Plus and Premium.

Perhaps the 2016 Corolla will be your first car, or maybe you just want something reliable that doesn’t cut corners when it comes to comfort. Luckily, the Corolla is more than capable of stretching your hard-earned dollar. 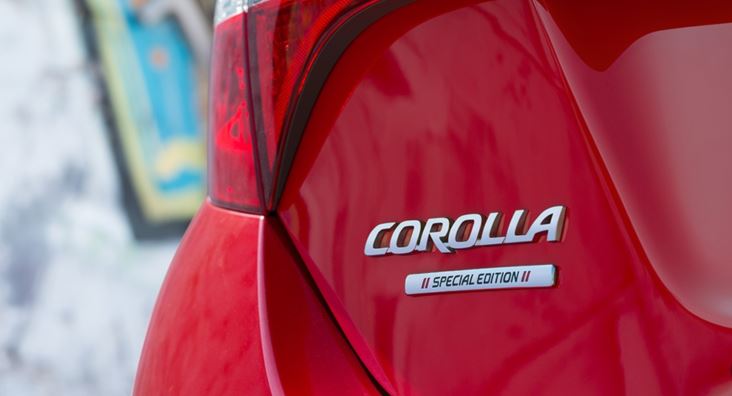 In addition to the L’s content, the LE adds (where applicable) 16-inch wheels, heated mirrors, and keyless entry. Also included are cruise control, automatic climate control, and a rearview camera for added safety and convenience. As if that wasn’t enough, LE models boast an upgraded six-speaker sound system—complete with six-inch touchscreen, voice controls, and the ability to download your phone’s contacts list. 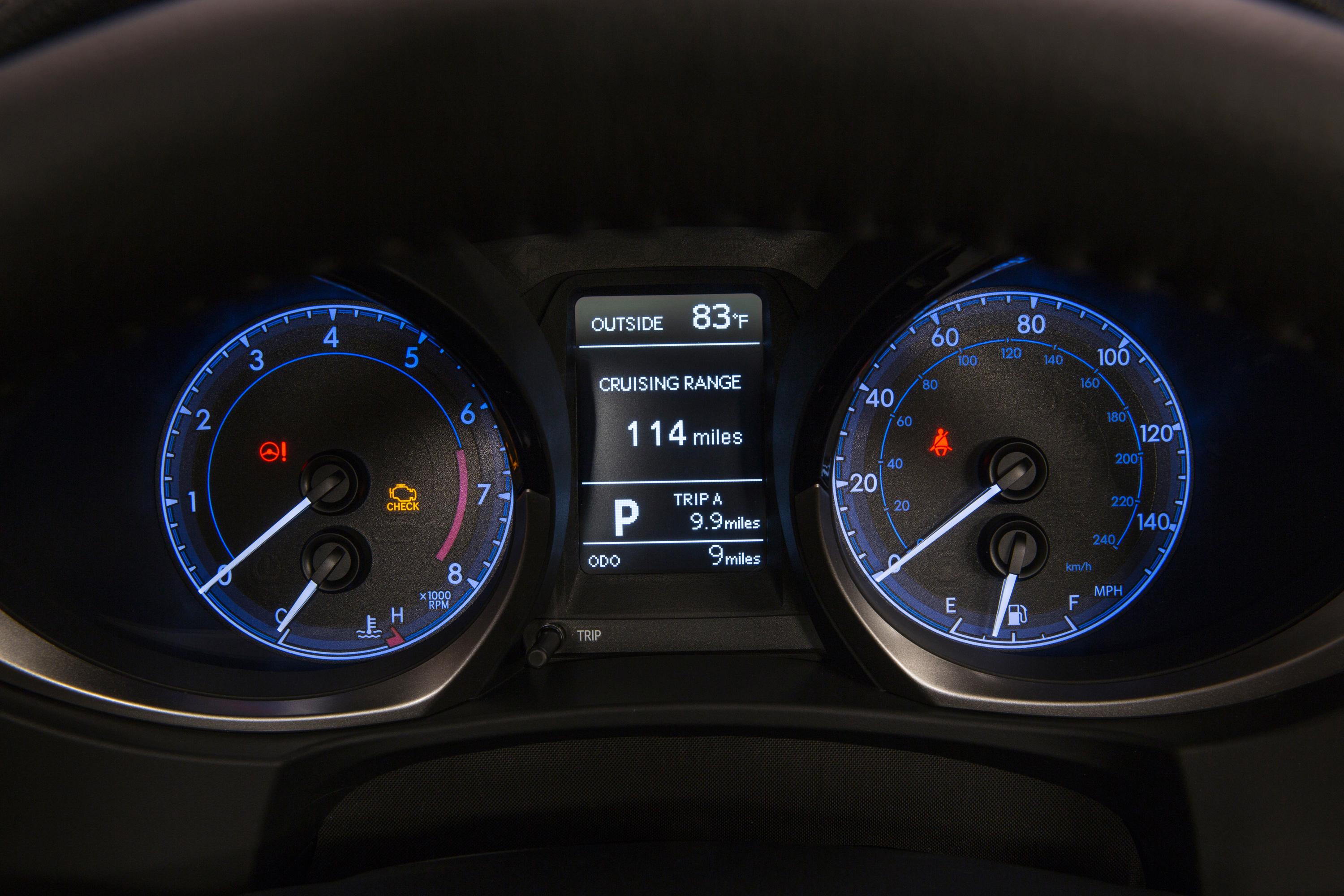 The LE Plus builds on the LE’s impressive features with a number of noteworthy additions of its own. Chief among them are 16-inch alloy wheels, foglights, unique piano black interior accents.

The LE Plus is also eligible for an optional sunroof and Driver Convenience package, the contents of which include keyless entry and ignition, a roof-mounted antenna, satellite radio, HD radio, and a navigation system that utilizes Toyota’s Entune App Suite. Entune is particularly neat because it allows you to access popular mobile apps such as Slacker Radio, Bing™, iHeartRadio, MovieTickets.com, OpenTable®, Pandora®, Yelp® and Facebook Places all from the comfort of your Corolla. 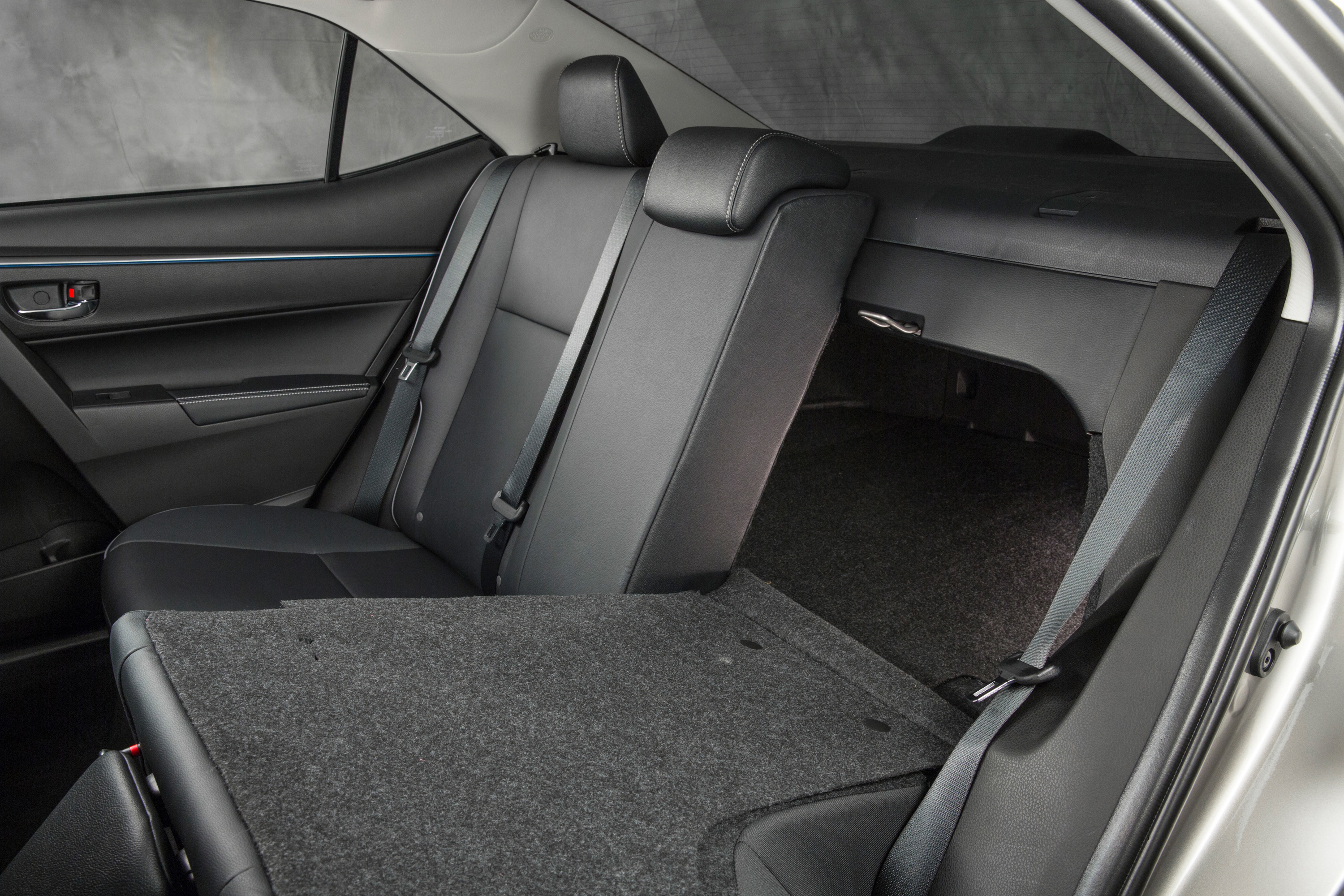 The LE Eco comes with all of the LE’s equipment and features a more efficient (and slightly more powerful) engine and transmission, 15-inch wheels with low-rolling-resistance tires, a rear spoiler, and enhanced aerodynamics. The LE Eco Plus gets special 16-inch alloy wheels, foglights, chrome window trim, and an Eco driving mode, while the LE Eco Premium gets the same upgrades as the LE Premium.

For the truly adventurous, the S trim is the sportiest Corolla available. It features a number of unique exterior touches like a chrome grille frame, a rear spoiler, and a chrome exhaust tip. Inside, the S displays evens more attitude thanks to sport front seats, a leather-wrapped steering wheel with paddle shifter, and sportier instrumentation.

S models can be further enhanced via the available Plus and Premium sub-trims. 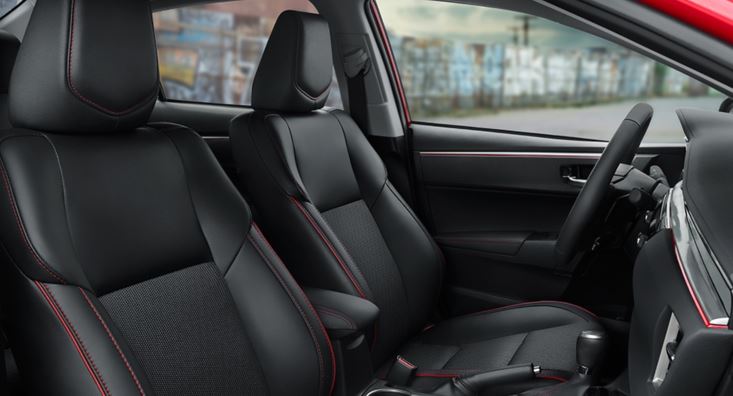 Throughout its long lifespan, the Corolla has featured solid designs but none were ever truly exciting. Thankfully, that’s no longer the case, and Toyota deserves a lot of credit for taking the latest-generation Corolla in a bold and new direction. 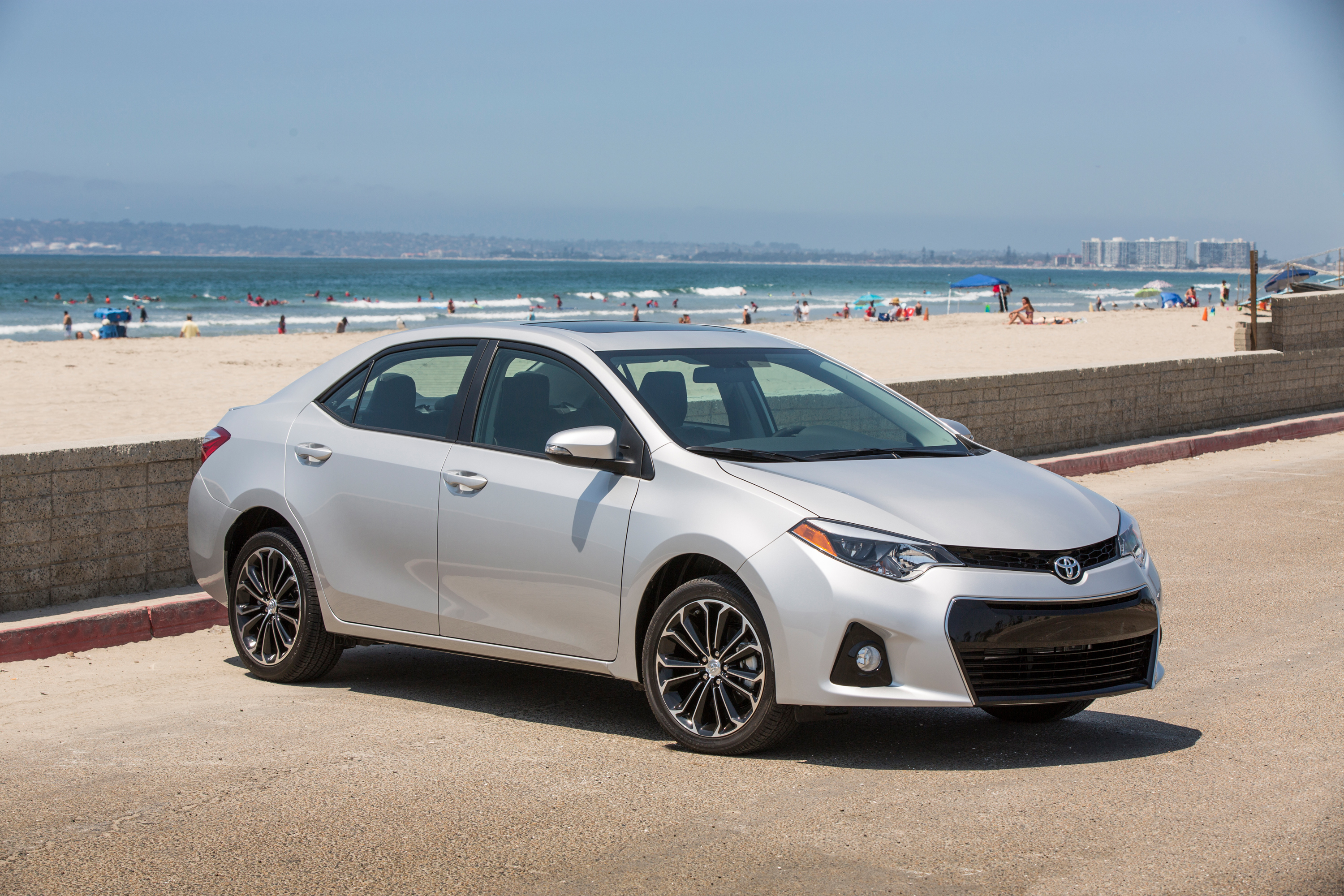 Indeed, there is a lot to love about the Corolla’s sleek new duds—especially in S and S Special Edition trim guise as these are easily the most visually appealing model in the lineup—but what will truly please fans both old and new is the Corolla’s redesigned interior. 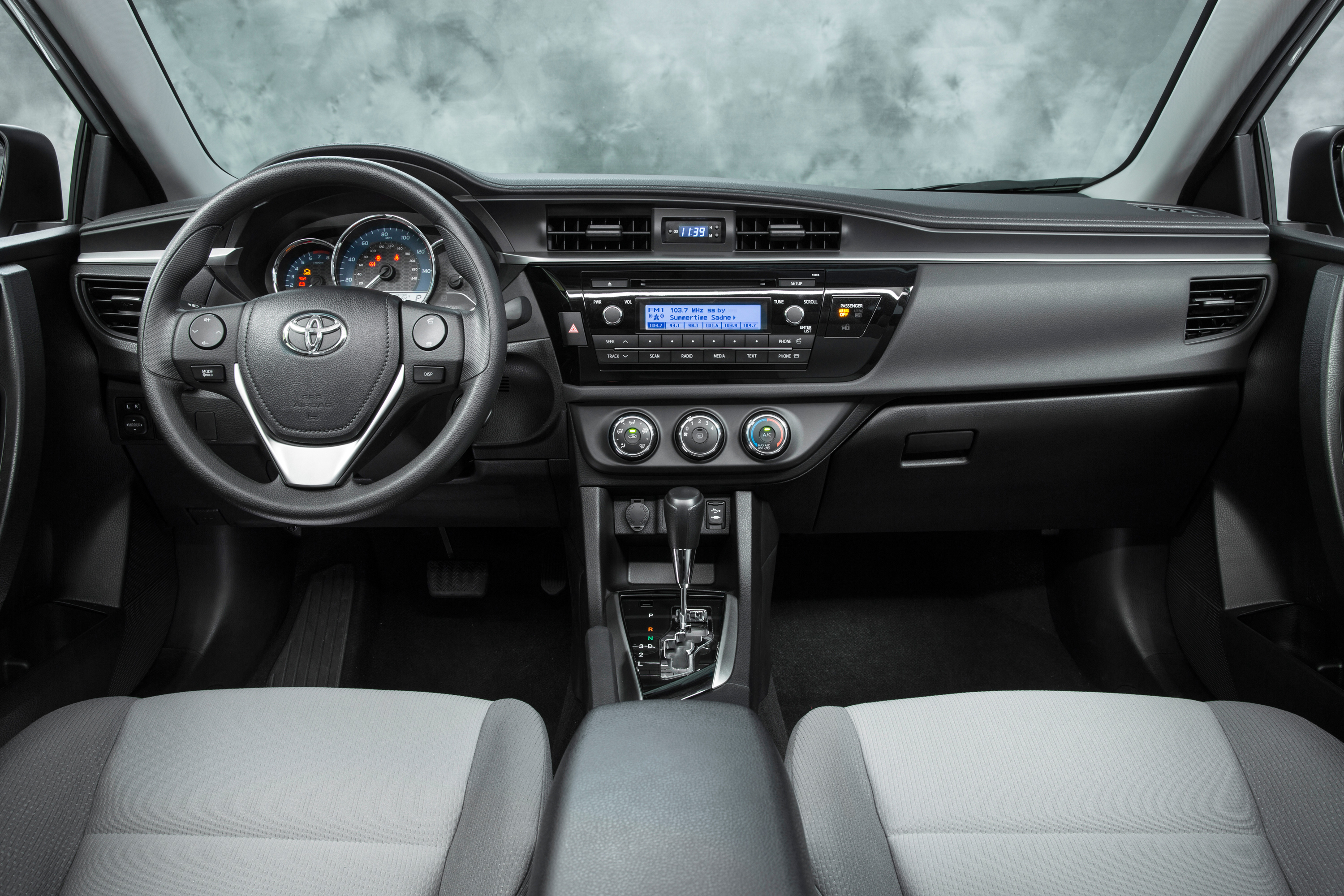 Inside, the 2016 Corolla is stylish and welcoming. The first thing you’ll notice is a fluid dashboard that creates a continuous line from each side of the cabin, which helps accentuate the interior’s many focal points—instrument panel, center console, passenger area. From there we move to the back, where the Corolla offers plenty of passenger space. There’s even ample cargo room thanks to easily reconfigurable rear seats.

The 2016 Corolla comes with standard antilock brakes, front side airbags, side curtain airbags, a driver knee airbag, and a passenger seat cushion airbag. That, of course, is on top of Toyota’s comprehensive Star Safety System™, an advanced integration of active safety technologies designed to enhance traction, braking and more. All Corolla models excluding the base L trim also come with a standard rearview camera.

While there are plenty of compact sedans to choose from, none come close to matching the 2016 Toyota Corolla’s pedigree as a consummate people pleaser. For 50 years the Corolla has dominated the small sedan segment thanks to an inventive mix of practicality, value, and comfort. If things continue this way, it looks like we'll be toasting the Corolla once again in 50 years' time.

For more information, or to schedule a test drive, contact or visit us at Wesley Chapel Toyota today.